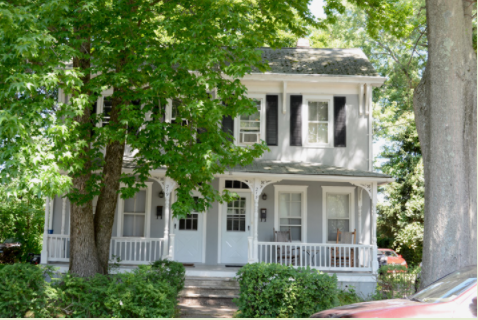 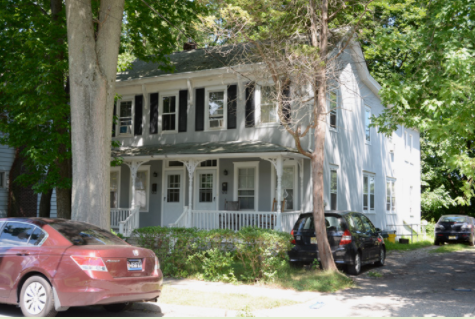 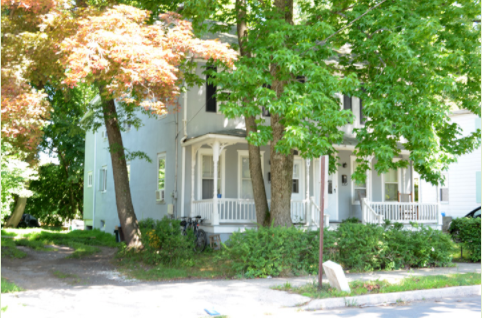 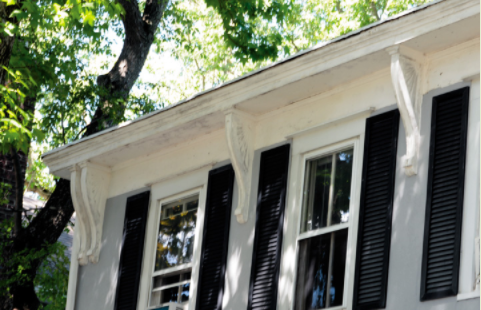 This house is a two-and-a-half-story, six-bay, Italianate twin building and its main features are its Italianate moulded consoles and hipped-roof front porch. It features a side-gable roof that is clad with asphalt shingles and has wood eaves and elaborately carved wood consoles evenly spaced across the wood frieze. The house is clad in stucco. The first floor of the south elevation features a one-story, full-length, hipped-roof, wood porch with two front doors in the center, one leading into 215 Birch Avenue (east door) and the other leading into 219 Birch Avenue (west door). The porch is accessed by a center concrete staircase that leads to the two front doors and that has a double, wood balustrade. The porch features four, original, turned-wood posts with decorative jigsaw bracketing and a wood balustrade. The front doors are flanked on their east by two, single, two-over-two, double-hung sash windows and on their west by two, single, two-over-two, double-hung sash windows. On the second floor, there are four, single, two-over-two, double-hung sash windows evenly spaced across this elevation. These windows are flanked by inoperable shutters.

There is a two-story, stuccoed addition attached to the north (rear) elevation of 215 Birch Avenue.

This parcel was vacant until c. 1930. The house appears to date to the 19th century; it may have been relocated here from elsewhere in Princeton c. 1930. Historic maps and Sanborn Atlases indicate that this particular property was vacant as late as 1918. The first historic map or aerial showing the house in this location is the historic aerial of 1940. Note: the 1930 atlas does not cover houses along Birch Avenue.